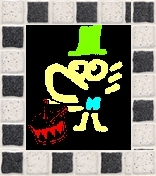 AS: You might remember last week when, for some reason, chess came up as a topic of conversation.

AS: As it does. And a guy rang in – I won’t mention his name – because he’d seen the fight between two players at the big chess open in Canberra recently. He’s then rang us back and contacted us about a chess website that’s available for people to go and peruse. We’re protecting his identity for fear of reprisal from the Australian Chess Federation for stuff he may say in this exclusive interview. Big Arthur, are you there?

AS: That is good to hear. Now, I’ve received information, Will, about a chess webpage called Club Bullwinkle, which, to quote, is Something of an underground organisation, a resistance movement, if you like, to the iron-fisted authority which is the Australian Chess Federation.

WA: Oh, yes. They’re bad news. I have the same problems with the H.H., which is the Hungry Hippos.

AS: So, Big Arthur, how tough are these guys at the ACF, and what are you aiming to achieve with Club Bullwinkle, your resistance movement against them?

BA: You don’t want to mess with the ACF, mate. Dangerous. They’re liable to absolutely ruin your life. They’ll take everything. They’ll take your house. They’ll hunt you down. To the ends of the earth.

WA: They’ll take your house, but first they have to go Check and then Checkmate.

AS: Exactly. They’ll put your house under pressure and threaten you to resign. Now, what is it that you’ve done, what’s the line that you’re not toeing, what is it that the ACF are trying to get you guys to do, that you refuse to be silenced on?

BA: Well, Club Bullwinkle is the place to go, the place to have a look at the way it really is. So people who can find our site somewhere – it’s hidden somewhere on the ‘net – can see for themselves what really goes on.

AS: I like the way that it’s hidden. You can’t get to it through the major search engines. At the moment you still have to kowtow to the Australian Chess Federation and go through their home page to get there, but we’ll link it to the Triple J Breakfast homepage so that people can visit Club Bullwinkle without kowtow-ing to those fascists at the ACF. OK, Big Arthur?

WA: Yeah, well they do. I mean, you know, for too long they’ve just ruled chess, thinking, Black and white boards. No, I don’t think so. Red and white. Red and green. Purple and yellow.

AS: Absolutely. Nude chess.* Where’s the Australian nude chess championships held? Not held. They don’t exist. You know what I’m saying? That’s the sort of thing that we need to get going.

AS: …Sitting on the info. So, you’re saying chess has to be made a little bit sexier, and I believe that Club Bullwinkle is actually, Big Arthur, is it not, having a poll to find Australia’s sexiest chess player?

BA: It’s happening. It’s happening right now. And the only requirement for any candidate is that people try to find out whether in fact they’ve ever played chess.

AS: Oh, so they don’t have to be with a FIDE rating of above 2000 or anything like that?

WA: So it can just be like Justin Melvey like, you know, discreetly with a rook in his pocket?

AS: Run us through some of the field, Big Arthur. Who are some of the sexiest chess players, male and female, kicking around the game at the moment.

BA: Hmmm. Should I say any names?

AS: See, Ian Rogers – the Australian champion – I like Ian’s work. He could trim the beard slightly, and maybe get a different set of glasses…

WA: Ian Rogers is a sexy name, too. You can just imagine him saying, I’ve come to clean the chessboard.

AS: What about yourself, Big Arthur? Do you look good in a nice sort of off-the-shoulder number, draped over a board.

AS: That’s really very sweet of you, Big Arthur. So if people want to get along, we’ll link Club Bullwinkle to the Triple J Breakfast Show site. What would you ideally like to achieve through Club Bullwinkle, Big Arthur? What’s the real goal here?

AS: The chess-playing fraternity within it, or the whole galaxy?

AS: In a perfect world?

BA: I’ve been saying for years, there should be more beach tournaments. You should be able to have a swim between moves.

BA: Yeah, that’s what we need.

AS: That would be fun.

AS: We’ll put you in charge of that, Big-

AS: …Big Arthur. OK, you get the raw chess player calendar out there. We’ll link the Bullwinkle site to the Triple J Breakfast page, so if people want to know what’s going on in the Australian underground chess resistance movement, you guys can ferry information out to them without having to kowtow to the toadying, fascist oppressors that are the ACF, yes?

WA: It’s got nothing to do with a guy called Nik…There’s no-one called Nik involved in this at all… Nik, never heard that name before…The chess player formerly known as Nik…

* Nude chess has, of course, been touted.