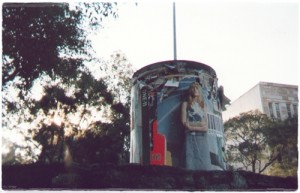 (Just What the Sweet Ballyhoo is it, Anyway?)

Club Bullwinkle was founded in 1994 by University of Queensland students Jacob Edwards and Konrad Uebel. Although usually assumed to be a reference to Bullwinkle J. Moose, the name actually is once-removed, deriving in fact from a racehorse (which from memory didn’t fare all that well).

In terms of chess, Club Bullwinkle limits itself to interclub matches, usually over the board but occasionally long-distance (such as the ‘97 telephone match versus Toowoomba). Socially, the club meets sporadically to play transfer.

Club Bullwinkle membership is conferred upon players immediately after their first interclub match, and is permanent. (Although Miguel Alvarado was banned for several years following that unfortunate incident at the Gold Coast’s Tin Corrupt.) Within the ranks there exists an inner circle – the pyramid of fame – for players who have represented Bullwinkle in ten or more long matches (or twenty or more rapid matches).

In the selection of any given team, preference is given to existing members, so the recruitment of new players is often last-minute and very much a test of prospective members’ ‘go to’ capabilities. (The best example of such a debut comes courtesy of Russell Mowles, who was drafted in with only five minutes left on the clock when it belatedly became evident that his predecessor – despite emphatic reassurances to the contrary – wasn’t going to show up. Russell, of course, went on to win the Bullwinkle Player of the Year award in 2002.)

The Bullwinkle recruitment policy being what it is, it seems almost inevitable that family members will fall like dominoes into the club.

Having played against (and lost to) several school teams with which it has an association, Bullwinkle has since found it cathartic to recruit some erstwhile opponents:

While some of these players have limited themselves to moonlighting for Bullwinkle, others have switched their allegiances entirely. In 2006 Craig Stewart became only the second player in Bullwinkle’s history to enter the Pyramids of Fame for both long and short matches.

In a gesture of goodwill (having poached Craig), Bullwinkle stalwart Jacob Edwards turned out for Logan City in two matches against Wacol (2001-2002), and was joined by Regina Grenfell for one versus the Gold Coast (2003).

Ipso facto, Bullwinkle has played against its recruits, but also it has had occasion to face some of its own: Nik Stawski, heading the rival team Santiago City in the Phoenix Cup of ‘97; Jonathan Humphrey, injudiciously loaned to Queensland University for a one-off match in 2003; Roland Schmaltz, pushing pieces for Café Checocho in 2007; Bruce Williams and Nik Stawski (again) pushed into defecting to the Redlands RSL and The Gap respectively in 2012.

Nik Stawski would like it placed on record that he is the world’s lowest-rated master. “Feeble Master, I said, damn it! Feeble!”

In addition to contesting an ongoing series of friendly matches (The Fozzle Stick), Club Bullwinkle has performed well at the various Queensland Interclub Championships:

And with limited opportunities, at a national level:

On the grounds that a team is greater than the sum of its parts, it has been suggested that Bullwinkle represent Australia at the Chess Olympiad. (Or, failing that, some random country that doesn’t already have a team.)

The Bullwinkle Club Championship has taken many and varied forms. To date, only two people have held the title: Jacob Edwards (1995-1998); David Smerdon (1999-‘2000’; 2019); although Konrad Uebel (interim champion 2000) is still fighting to have recognised his claim to the Dragon Championship.

Since the club’s inception, there have been three of these:

•    Sometime in the mid 90s, somewhere on the South-East Freeway, where it was voted (unanimously) to adopt the Pet Shop Boys’ Opportunities as the Club’s official anthem.
•    In 2007, half way up Mount Gravatt, where it was decided (again, somehow, unanimously) to change the Club’s official anthem to the Pussycat Dolls’ Don’t Cha.
•    In 2013, northbound on the Pacific Motorway (somewhere near Dreamworld or Yatala Pies; no-one quite remembers), where the anthem was changed once again, this time to David Bowie’s Ashes to Ashes.FUNDING

In the good old days, Club Bullwinkle paid all its affiliation and entry fees from tournament prize-money. The source of this income having dried up, the club now fills its coffers courtesy of Bartley, a spotted elephant who patrols the transfer tables, shaking down club members for loose change.

Rumours of an obscenely rich anonymous benefactor have persistently been denied. (Although the team did stay in that penthouse at Caloundra…)

Jacob Edwards once bet $1 with Redcliffe’s Mark Stokes on the outcome of Corner v Stawski in the 1999 Phoenix Cup, but that particular golden egg was blundered away in time trouble.