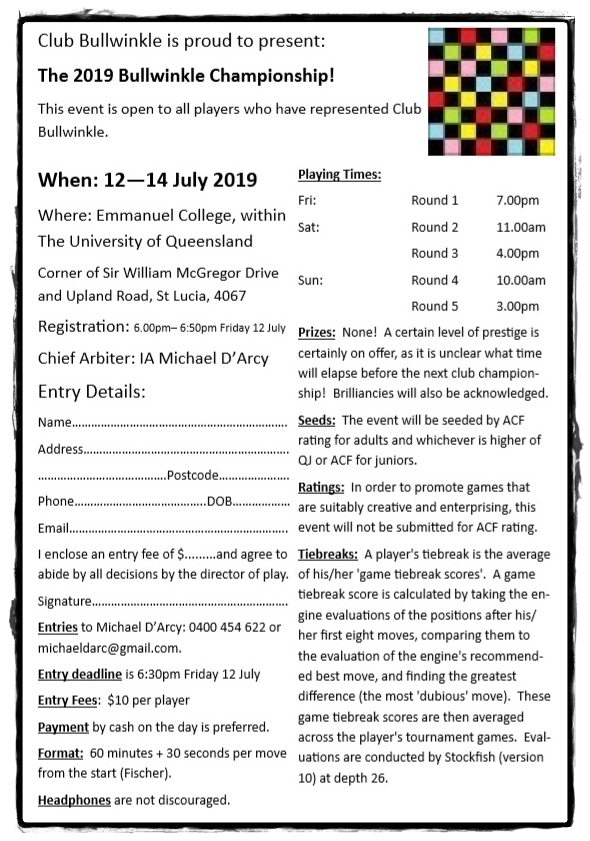 Bullwinkle Club Championships are rare and wonderful creatures. Prior to this year’s Pig, the most recent was the Dragon Championship of 2000, played out across three calendar years at the turn of the century – before any of the current junior participants were born!

The Pig Championship of 2019 rose unexpectedly from one of IA Michael D’Arcy’s New Year’s resolutions, bestowed upon him by fellow club members. Bullwinkle players have a history of gifting each other resolutions that are too outlandish to contemplate. ‘Organise a Club Championship,’ we told Michael.

Against all common sense, he did.

The 2019 Club Championship was open to anyone who’d ever played for Bullwinkle in its 25-year history of interclub matches. Carrier pigeons were sent far and wide. Players were tracked down in distant lands. Some promised to return. (Kevin Casey writing from Romania: ‘Tentatively, I accept your kind invitation.’) Others made plans to flee. (Alejandro Dubrovsky: ‘By mid-July I should be around 11,840km north-east of Brisbane.’)

In the end, 21 players turned out – fully a quarter of those eligible. The tournament was held in the Riverview Room at Emmanuel College, St Lucia, over three days and five rounds at time controls of 60+30. As per Bullwinkle’s famously relaxed attitude, headphones were encouraged and byes were readily available. Participants came and went, popping in and out like a gracefully choreographed game of Whac-A-Mole.

(Enormous kudos here to Michael, who, in the right spirit but without sacrificing his professional integrity, single-handedly kept the whole shebang running.)

At the conclusion of 5 rounds, few people were surprised to see that GM David Smerdon had—with a picket fence, no less—defended his title. Minor places were decided by Bullwinkle’s innovative tiebreak system, the machinations of which sought to reward interesting (or dubious!) play in the first 8 moves of each game. By this measure, the aforementioned Kevin Casey finished 2nd while Brian Thomas edged out Andrew Mather for 3rd (Andrew lamenting that his first-round blunder came on move 9!).